It’s the moment you have all been waiting for. Our award-winning judge Andrew Norriss has chosen the Smart 11+ Creative Writing Competition Winner for 2022!

The creative writing winner is finally here! We are delighted to announce that Amber Smith has won the first Smart 11+ Creative Writing Competition.

We received over 80 entries!! We were absolutely blown away with the level of creativity, skill, and imagination displayed in every piece. In the words of Andrew Norriss himself:

‘I thoroughly enjoyed reading all the entries you sent me – and was most impressed by the imagination shown in all of them. Please pass on my congratulations to the students who sent in their pieces. One of the first (and most important) hurdles any writer has to face is actually finishing a piece of work and being brave enough to send it off – and your students all managed to do both!’

Our Creative Writing winner Amber Smith, aged nine, has crafted an outstanding piece of writing that grabbed our attention, with wonderful use of vocabulary and literary devices.

‘The writer imagines that the four seasons are four siblings, and while everyone likes Spring, Summer and Autumn, Winter feels kind of left out and unloved and retreats to the polar regions in a bit of a huff. But the absence of winter makes everyone realise how essential this sibling is to balance the other three. I think this story is probably based on a myth that the writer heard from somewhere, but I have no objection to that. Writers take ideas from other people all the time, but then make them their own. And this is not only a good story, it is beautifully told, easy and clear to read… and it ends properly’

Amber has won a £50 Amazon voucher for her hard work, as well as copy of Felix Unlimited by Andrew Norriss and to be published on our Smart 11+ Tuition Blog.

So, without further ado, we are thrilled to present ‘Winter is Here’ by Amber Smith: 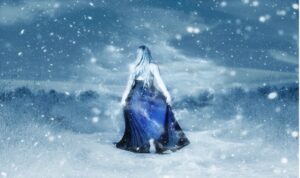 In the beginning there was only night and dark.  Then came the twinkling of the stars.  It was from these dazzling bright stars that the Season Siblings were born. Soaring towards a drifting lonely rock, riding the crest of their shooting star, they crashed to the rough, uneven surface and this immense boulder was transformed.

Four children emerged from the crater created on the ground.  The observed their surroundings and smiled shyly at each other.  They squinted as a burning ball of light ignited in the sky above them.  They turned to look at each other and realised one of the girls had created this light and heat. The others tried to copy and create their own light source but only the girl could.  This girl announced she was called Summer and she had made the sun.

A small flower slowly emerged from the ground, followed rapidly by blades of grass and new life was created on the once desolate sphere of granite.  One of the other girls looked at her hands as she had created these buds, she called herself Spring as the life had sprang from the ground.  As quickly as the flowers had appeared they began to wither and die and together the girl called Spring and the boy created grey pillows in the sky and water rained down on them, which injected life back into the faltering flora.  The boy declared he was called Autumn. From the muddy puddles, the tip of a small worm wiggled out and insects and animals developed on the planet.

The rain ran into the ditches and trenches, it relentlessly fell filling every crevice on the rock forming rivers, vast lakes, beautiful blue seas and oceans were formed.  Mountains and valleys were formed.  The last girl ran to the nearest lake to bask in its beauty, but as she touched the water it hardened and became cold.  This girl was Winter.  The other children were cross that their creation seemed to be ruined and frozen.  The tips of the mountains wore a blinding, snowy cap that did not melt.  Winter explored the Earth and everything she touched turned to snow. To prevent the world turning to snow, the three other siblings separated the land into 7 continents.

Over the years the siblings worked on their powers, realising that for life to thrive they had to separate only some of them occasionally meeting as the Earth needed a change in season.  As everyone does the four made many mistakes with parts of the world covered in deserts and Spring produced too much greenery too quickly and summer shone the sun too bright and scorched the Earth.  Winter did something much bigger plunging the world into ice and snow for years killing all but the most resilient life on the plant for many years.  You might know this as the ice age.

Eventually mankind evolves to inhabit the Earth.  The seasons embrace this change and introduction of intelligent life.  Humans find ways to adapt to the seasons.

After many winters, the people start getting angrier and angrier as it gets cold and slippery, which means there are a lot of accidents.  The are unhappy by the shorter days as they don’t have the time to work and play, having to go inside their houses for shelter from the snow and the dark.  They shout at Winter, which makes Winter very sad.  She sees that all her siblings are embraced and enjoyed but everyone seems to loath her.

One year she decided to leave and go to Antarctica, where she knew she could truly be alone as not many ventured here.

That year Spring came and the crops were good, Summer was embraced, then people loved the cooling breeze of Autumn and the colourful leaves but then Winter didn’t come.  The siblings started to worry and panic.  The three came together, which they never did and the Earths weather system was out of control, the heat of the burning sun only soothed by the torrents of monsoons caused by Autumn and spring, it was destroying the life on Earth.  The Seasons saw this and decided that Spring should just arrive early, without Winter coming.

No one realised that without Winter, the animals could not rest and hibernate.  They were confused and tired, they could not hunt for food and so their numbers grew low and most creatures were on the verge of extinction.  Try as she may the crops Spring tried to bring wouldn’t grow and those that did were small and shrivelled.  That was because the Earth did not have time to settle and the nutrients that were normally rejuvenated under Winters blanket of snow were mostly gone.

In panic Spring called Summer to make people happy and warm, but the heat from her sun, killed what plants had grown and people and animals were starving.

Summer called Autumn so his breeze would cool people and they could enjoy, however but the breeze without food chilled the people and there were no trees or plants to show off his vibrant colours.

The Seasons and the people realised how important Winter was for life and how much they needed her.  They searched the globe finally going to the frozen Antarctic, to find Winter crying and alone.  They begged her to return, convincing her that she was just as important as her siblings, they apologised for how rude they had been.

When she returned the animals fell into a deep sleep and the ground sighed and repaired itself under her frost and snow.  The scorched plants enjoyed her layer of frost on their leaves.

The people now saw Winters beauty, took time to gaze on a snowflake and finally, the people cheered and shouted Winter is here!

If you are interested in learning more about creative writing, we run booster courses in October and February to support pupils in their creative skills. Get in touch if you are keen to learn more! 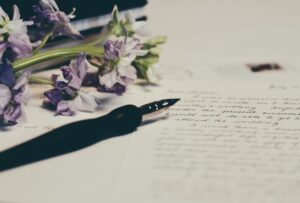