Write a story with the title ‘The Dare’.

Could it get any more daunting? Most average people see that and see a sea of problems. What if I pick the wrong topic? Or if I can’t think of an ending? What if the topic I pick is the topic everyone else picks? While this is going on in your head, nothing is going on the paper. So, here at Smart 11+ Tuition, we wanted to let you know two top tips to help you develop a story. In the event that you see a question like the above, panic doesn’t ensue and instead a sense of peace lifts you up and helps you to crack on with your writing!

Okay so step one. You have probably heard it over a thousand times but it does actually work. When you see this open question that gives you no direction, the first thing you do is pick a road and start driving. Take the below example:

The first thing that pops into your head is that time when you saw your friend cheating at school and you weren’t sure whether to tell the teacher. Great! That’s a fantastic story and it’s easier to write because it is based on true events.

So next step, what happened? Write out a bullet point of a sequence of events:

Okay so now what’s the most dramatic way you could tell this story? Re-write your sequence of events:

Suddenly, in five minutes you have a beginning, middle and an end. A direction to your story, based on real-life which makes it easier to describe. 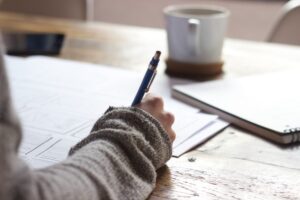 You mean the teacher was actually right when they said they look for literary skill in writing? Yes, yes they were.

“Ann went into the kitchen. It was really cold and the dishwasher was on. Ann decided to make some toast, so she grabbed some bread and stuck it on. When she had made the toast Ann went back to the living room where a giant alien was waiting. Ann offered him some toast and they ate it together.”

Great ideas! Originality and good guidance through the plot but no pizazz. It lacked interest. At the point that Ann was making toast were you interested and wanted to read more? No. It was boring – but still a good idea.

So, let’s have a re-write shall we?

“Ann snuck into the kitchen quietly. The stone floor was bitterly cold beneath her bare feet. She was sticking to the floor like it was made of ice. Suddenly, the loud quake of the dishwasher startled her and she hurried to the bread bin to make some warm food. as she was making her toast she saw a flash of green at the side of her vision. She grabbed her food and headed to the living room, where she was greeted by a gigantic lime-green alien. The alien had blue teeth and ten eyes, black as coal. His head hit the ceiling and left a trail of slime. Ann was so scared that she shakily lifted the plate towards the alien. The alien lifted a tentacle to the plate, grunted like a dog and gobbled the toast greedily.”

The use of literary devices: metaphor, simile, vocabulary, and adjectives lifted the story. It made it interesting and engaging to read. This is the aim of all creative writers.